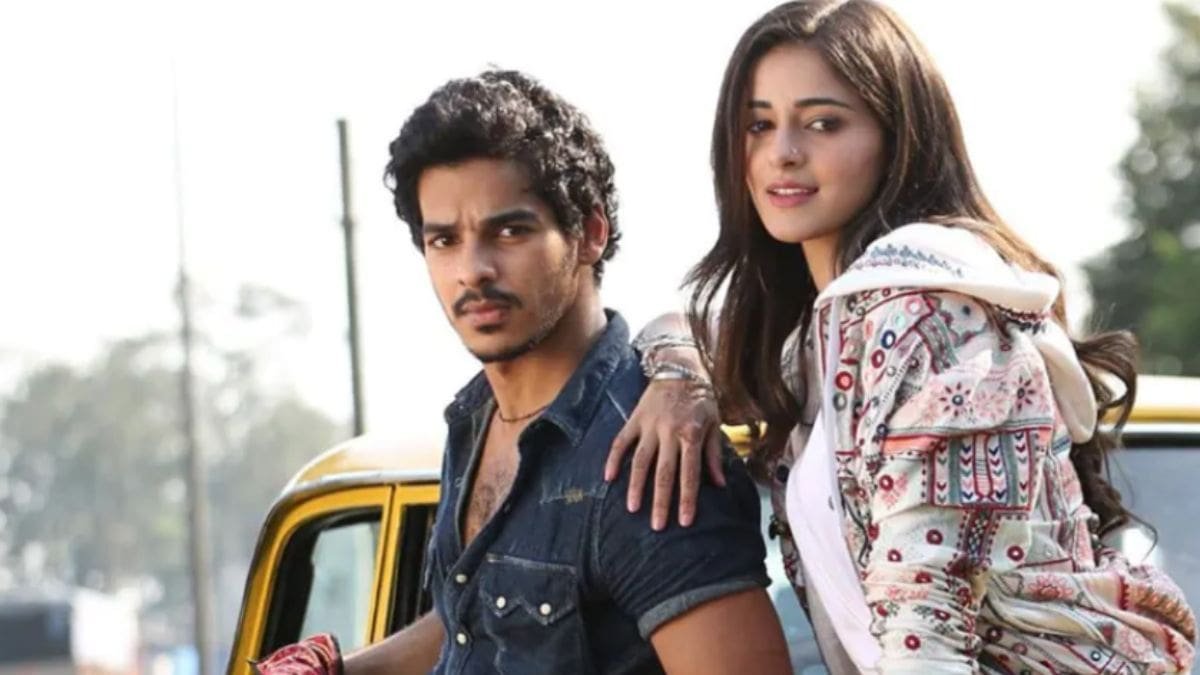 STORY: On a fateful night, local cabbie Blackie (Ishaan Khattar) stumbles upon this pretty – also mouthy and hot-headed – girl Pooja (Ananya Panday). There are goons involved and apparently, there’s this history between them, and Pooja, the runaway, seems to be carrying a ton of cash and jewelry. Why does this ‘Aafat’ (by Blackie’s own admission) fall into his lap after all these years and what’s the mayhem all about?‘Khaali Peeli’ is one eventful ride towards redemption, reconnection, and, of course, romance!

Back in the day, in their native village of Shivpur, when Vijay Chauhan aka Blackie was at the ripe age of 10, his Babuji (Anup Soni) was notorious for being an absolute phattu. But, by pure luck, his son is born with a mean streak and is also an ardent hustler in the making. So, perhaps to prove a point to the villagers and themselves, the father-son duo embarks on a journey of crime that is doomed from the start, again, thanks to Chauhan senior’s namby-pamby ways. Cut to 10 years later, Vijay – now earning the moniker Blackie because of his swindling schemes – is on the run and has settled in Mumbai as a local kaali peeli (hence the name, get it?) driver. But in the current day, the city is fuming with anger as the taxi association calls for a strike for an indefinite period of time until the government meets their demands. Not Blackie though. He refuses to adhere to the directives and looks at it as a window of opportunity to mint money and extract as much as he can from the needy… talk about being morally bankrupt! In comes the salwar-clad ticking time bomb Pooja, who’s clearly on the run from some dangerous people and has a bag full of money and jewels. Her safety, he is not worried about but the hefty moolah, he definitely is. The story of ‘Khaali Peeli’ navigates many a dark alley of Kamathipura (Mumbai’s red-light district) and finds itself back to its place of origin – Uttar Pradesh. What transpires over a period of two days – with a distinct overlap of past and future – is what this dramedy encapsulates.

Flicking the back of his collar while lighting a borrowed cigarette in a Rajinikathesque fashion, Blackie makes an open declaration about his persona to the camera.He doesn’t compromise on two aspects of his vagabond-ish life – Tashan and ‘emosan’. The opening shot is evidence enough to predict that the rest of the tour is an out-and-out Bollywood masala flick. And director Maqbool Khan delivers on various accounts. There are creepy hooligans with creepier names (sample this: Yusuf Chikna!), there’s the eternal sacrifice constituting the central theme of the narrative, there is an inspector called Tawde and bullets flying all around the hero, who, well, escapes unhurt! And speaking of the pace of the film, the first 30-40 minutes are absolutely packed with quirky dialogues and has an amount of visual excitement that’s appreciable.

However, the stumbling block in ‘Khaali Peeli’ seems to be with Sima Agarwal and Yash’s screenplay: the integration of the flashbacks with the current timeline kind of takes away from the momentum of the plot; few hits and a lot of misses. In an attempt to connect the dots and explain the situation that the characters are in, the writers often turn to inculcate emotional setbacks and tried-and-tested tropes that feel a tad bit dragged. Also, the chemistry between Ishaan and Ananya is not one of the most sizzling or believable that we have seen in films in the recent past (there is an awkward kiss, too). Truth be told, the child artists playing their younger selves have a better rapport than these two.

By looking at his dominance in every frame, one can tell that Ishaan has worked really hard not only on getting into the skin of his character but also rendering the nuances right – the perfect rolling of ‘Rs’ while speaking the colloquial slang, the cocky walk of Mumbai’s roadside Romeos and basically just being air-light in action and dance sequences. In peppy numbers ‘Duniya Sharma Jaayegi’ and ‘Tehas Nehas’, Ishaan displays the skills of a trained dancer and also reminds us of a younger Shahid. Even in those Patiala suits and that enormous nose pin pierced on the wrong side, Ananya looks every bit the glam gal that she is. But it is almost impossible to imagine her character Pooja leading a dark and disturbing life in the lanes of the unforgiving Kamathipura. The fact that she is putting an effort is evident, but in this role, she lacks the conviction of a girl with a hard life. Heightening the ‘H’ in hilarious are veteran actors Zakir Hussain as inspector Tawde and Satish Kaushik as dumbo-in-denial inspector Bhim. These two humourists add the right dash of spice to the chase that gets us all restless at times. Likewise, delivering solid performances on the grey side of the line are Jaideep Ahlawat as Yusuf Chikna and, to everyone’s surprise, lyricist Swanand Kirkire as the hung-up aashique Choksi Seth. Ahlawat gets you with his deathly glares and occasional swaying of the hair. And Kirkire is what he is portrayed to be – a lustful, potbellied rich businessman.

Sure, Vishal-Shekhar music gets you grooving but the three songs that are planted in the movie are just there for the heck of it. Lyricists Rakesh Kumaar and Raj Shekhar have interesting and edgy words to offer in the three tracks that they anchor but, like we said, the songs are a bit out of place.

In a nutshell, ‘Khaali Peeli’ has slow-mos and a background score that is faster than the heartbeat of an average young adult and on top of everything, a hot pair leading the show! But it derails every once in a while and you wonder – quite empathetically – why! Then again, if you are missing your regular dose of the larger-than-life heroes on celluloid, ‘Khaali Peeli’ is the turn you take – samajla na?

Get the latest Entertainment news of Movies, Television,Music, and many more from India & around the world. Now follow your favorite TV Celebs and telly updates. Clicklink is your one-stop destination for the latest trending Bollywood news. Subscribe for more updates with all the latest news and headlines from the world of entertainment.